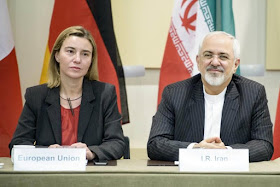 BRUSSELS (Reuters) - The European Union agreed 18 million euros (£16.1 million) in aid for Iran on Thursday, including for the private sector, to help offset the impact of U.S. sanctions and salvage a 2015 deal that saw Tehran limit its nuclear ambitions.

The announcement is part of the bloc’s high-profile efforts to support the nuclear accord that President Donald Trump abandoned in May. It is part of a wider package of 50 million euros earmarked for Iran in the EU budget.