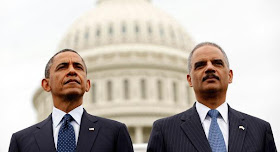 WASHINGTON — Attorney General Eric Holder delivered recommendations to President Obama on Friday on how the Justice Department should overhaul its guidelines for conducting investigations of leaks to reporters.

White House spokesman Jay Carney said that Obama accepted the recommendations made by Holder, but did not offer any details about how the guidelines may be tweaked. Carney added that the Justice Department would likely release Holder's report later on Friday.

My Comment: So the government will now define who exactly is a reporter .... and can they then be protected by these new guidelines. Hmmmm .... since bloggers are not journalists I guess these "new protections" will not cover us.
War News Updates Editor at 2:00 PM
Share