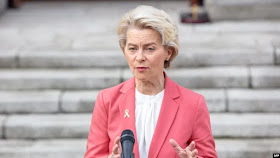 European Commission President Ursula von der Leyen speaks in Dublin on Dec. 1, 2022. "Russia must pay for its horrific crimes," she said, laying out arguments to establish a United Nations-backed court to examine Russian aggression in Ukraine.

The Guardian: France backs plans for tribunal for Russian officials over Ukraine war

France has become the first major western state to publicly back the creation of a special tribunal to try senior Russian officials – potentially including Vladimir Putin – for the crime of aggression in Ukraine.

The French foreign ministry said on Wednesday that it was working with its European partners on the proposal.

The statement came after the European Union and the president of the European Commission, Ursula von der Leyen, lent support for the tribunal in a speech on the bloc’s plans for Ukraine.

The EU wants a court to probe Russian war crime claims. Will it work? -- Euronews