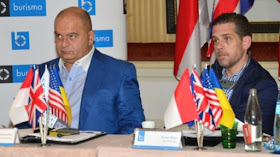 An indictment drawn up by Ukraine's Office of the Prosecutor General against Burisma owner Nikolai Zlochevsky claims that Hunter Biden and his partners received $16.5 million for their 'services' - according to Ukrainian MP Alexander Dubinsky of the ruling Servant of the People Party.

Dubinsky made the claim in a Wednesday press conference, citing materials from an investigation into Zlochevsky and Burisma.

"Zlochevsky was charged with this new accusation by the Office of the Prosecutor General but the press ignored it," said the MP. "It was issued on November 14."

WNU Editor: With all the focus being on impeachment in Washington, there is some big news in Ukraine. The Russian news agency TASS was the first "English" news service to report this Ukrainian story .... Joe Biden’s son and his partners received $16.5 million from Burisma — Ukrainian MP (TASS). When I checked out the Ukraine sites, I noticed that this is a huge story being covered extensively (but still ignored by the West). The reason for these Ukraine indictments is that the Zelenskiy government wants to know where did all the money go. 40% of the Ukraine budget is now dedicated to paying off foreign debts and obligations, and no one can properly account where did all the money go. To say that Ukrainians are upset over all of this is an understatement. Fortunately, the Zelenskiy government wants answers, and I can only hope that they will find them, regardless on where it may lead, even if all roads lead to Washington.

Update: This story has now been picked up by Reuters .... Ukraine widens probe against Burisma founder to embezzlement of state funds (Reuters).
War News Updates Editor at 10:00 AM
Share